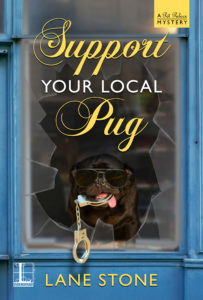 Buckingham Pet Palace may provide services fit for a four-legged king, but there’s no use crying over spilled kibble—not unless it leads to murder!

When a break-in at the Pet Palace robs Sue Patrick of more than her beauty sleep, she intends to tidy her ransacked doggy daycare and spa before making any rash decisions. But after Sue abandons her better instincts to rescue a petrified pug stranded at a lighthouse in the Delaware Bay later that morning, she’s lured off mainland Lewes long enough for a freshly murdered body to get dumped in her driveway . . .

Aided by Lady Anthea Fitzwalter, her practically royal business partner from across the pond, Sue sniffs out clues about the yappy pug with a complicated history and the old car spotted at both crime scenes in hopes of IDing the culprit. As the investigation leads them back to the bay, the ladies soon find themselves immersed in a case trickier than a canine agility course—and chasing after a well-groomed killer who will do anything to maintain a perfect reputation . . .

My phone rang as I got back to Buckingham’s parking lot. I swiped the screen to answer the call, then dropped the arm holding it to my side. The sight in front of me was such a shock I couldn’t speak. The window of one of the outside doors had been smashed and a piece of driftwood propped that door open. A section of a log, five or six inches tall and wide enough to sit on, held the interior doors apart. We had two sets of doors which gave us a sporting chance when a puppy backed out of his collar and decided running from the groomer would be a fun game, or when a grown dog heard the call of the wild.

“Sue! Can you hear me?” It was our police chief, John Turner, and he was on the phone I had dangling by my side.

I listened for what I hadn’t heard. A siren. The alarm company had called the police before calling me, so where were my public servants?

“Why aren’t you at Buckingham’s?” I asked.

“Why would I be at the Pet Place?” he asked in return.

“It’s Pet Palace, as you know, and why would I be at Anglers?” I didn’t bother to ask if he meant Anglers Fishing Center or Anglers Marina. I wasn’t at either one, so it didn’t matter.

“Hold on. The dispatcher wants me.” He hung up, leaving me staring at my phone. I guess he didn’t know the meaning of hold on. That was fine with me since I didn’t have time to talk.

I tucked my phone into the waistband of my yoga pants and went in to my pride and joy—my very successful pet spa. I stepped over the driftwood and sidestepped to get in through the right side exterior door. The interior doors were only separated by the width of the log, which no adult could squeeze through, so I pushed one of the doors open. Once I was through my feet crunched on broken glass. Dry dog food was strewn all over the lobby floor, and I crushed and scattered it underfoot as I made my way to disarm the security system.

I turned to see the door to the storage closet in the hall standing wide open.

I went behind the desk and used the intercom to call my employees on the upper level. “Taylor? Laurie? Can you hear me?”

The phone at the reception desk rang and I answered it. “Is he gone?” It was Taylor.

That’s when, at last, I heard the police siren. If I wanted to check out my dog food storage closet before the “don’t touch anything,” yada yada speech, I’d have to move fast.

We had briefly considered installing a lock on the cherry-stained wood door, but felt a deadbolt wasn’t in keeping with the royal, or at least British upper-class, ambiance we were trying to create for our pet parents.

I scanned the shelves. We’d need to inventory what was left to learn the exact amount of our loss, but it didn’t take a CPA to know that several of the large bags of the gourmet dry food were gone. Two shelves were empty. The cases of canned food didn’t seem to have been disturbed.

“Sue! Are you all right?” a baritone voice called from the lobby entrance.

I came out of the storage closet. “I’m fine,” I answered.

Chief John Turner stood in the doorway literally scratching his head, as he took in the debris on the floor, before looking up at me. “Good morning,” he said with what some of my favorite books would refer to as a sardonic grin. “What have you touched in here?” His winter uniform wasn’t really a uniform. He was wearing a white shirt, gray slacks, and a black Lewes Police Department windbreaker.

“Nothing.” I walked to him and held out my hands in case he wanted to test for dog food residue.

“I don’t hear the alarm. You must have touched the keypad.”

“You walked through the dog food,” he continued. “We would have liked to check for footprints.”

“And you moved those doors.” He pointed at the interior set of doors.

“I pushed them open in a way that prevented disturbing any fiber evidence.”